The Prohibition Era was the bloodiest period in Cleveland History.  Try to keep track of the mob hits as rival gangs brutally battle to control the city’s rackets.  Many of the mob leaders didn’t survive the period, a few lived to a ripe old age, and some became respected icons in the community and beyond.

Jerry Siegel and Joe Shuster, two kids from Glenville High School, created the world’s most enduring Superhero. Meet the original Superman and learn how he was influenced by the boy’s lives in Cleveland!

They came from Cleveland

Baby Boomers who came of age in Cleveland listened and danced to rock music at venues like The Agora, The Plato and the Hullabaloo Clubs. Come and share your memories and listen to audio clips from bands like The Raspberries, Rastus, Glass Harp and The James Gang!

In the 1930’s stormtroopers were marching in Parma and local auto-workers were being recruited for jobs in German factories.  Learn how Rabbi Silver’s League for Human Rights led the fight against the fascists in our town.

The King of the Moondoggers:

Alan Freed and the Birth of Rock and Roll 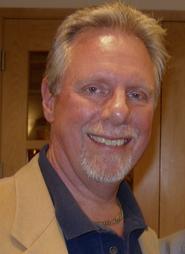 It’s 1920, the jazz age is in full swing, prohibition is the law of the land and the New York Yankees have just signed Babe Ruth.  The Cleveland Indians have set their sights on a World Series title, but to get there they will need to overcome an unspeakable tragedy.​

All of the proceeds of Dennis’ s Lost Cleveland programs will be used to fund the work of the A-T Children’s Project.

Dennis and his wife, Mary, have five beautiful grandchildren. Two of their grandsons (Dylan and Sean) have been diagnosed with ataxia-telangiectasia, more commonly known as A-T.

A-T is an extremely rare, genetic disease. A-T causes progressive loss of muscle control, immune system problems and a high rate of cancer.  Sean is already a cancer survivor. He was treated for B-cell lymphoma when he was 2 years old.

Because A-T is so rare, it gets little attention and even less funding. The A-T Children’s Project (atcp.org) was started to raise funds for research and life improving therapies for children with A-T.

Have fun with Cleveland history!

The vision was a venue that would draw thousands for events like boxing, football, track, soccer, operas and community celebrations - with baseball as the lynchpin.  The new stadium would bolster the economy, increase tax revenues and elevate Cleveland’s status. But there was a problem: the Cleveland Indians didn’t want to play there!

MEET ME AT GATE A:

MUNICIPAL STADIUM IN THE 1930'S

Hometown Rockers from the Sixties and Early Seventies

Bloody Corner and Beyond:

Follow Alan Freed on his journey to Cleveland and beyond as Rock and Roll is being born. Dance at the Moond​og Coronation Ball!  Program includes audio clips from nine early Rock and Roll favorites.

Ray Chapman and the 1920 Cleveland Indians

Danny Greene and John Nardi tried to muscle in on the Cleveland Mob’s operations. The result was a bloody mob war that left Cleveland with the moniker “Bomb City USA!”

TRUTH, JUSTICE AND THE Cleveland WAY:

This highly interactive program will test your knowledge of Cleveland’s hometown heroes.  Some of the celebrities are easy to identify, while others present more of a challenge!

It’s autumn 1945. Movie star Jane Russell has taken up residence in Cleveland to be with her husband, Bob Waterfield, who is leading the Cleveland Rams to the NFL Championship game.

Originally known as Doan’s Corners, the area began as a stagecoach stop on the road from Buffalo to Cleveland. In the first half of the 20th Century it became an entertainment Mecca offering Clevelander’s a taste of New York City high-life. By the 1970’s it was referred to as an “inner-city Disneyland’ and was the flash-point for battles with the city’s power structure. Today it is part of the sprawling campus of Cleveland Clinic. Program includes audio clips from famous celebrities who performed in the neighborhood.